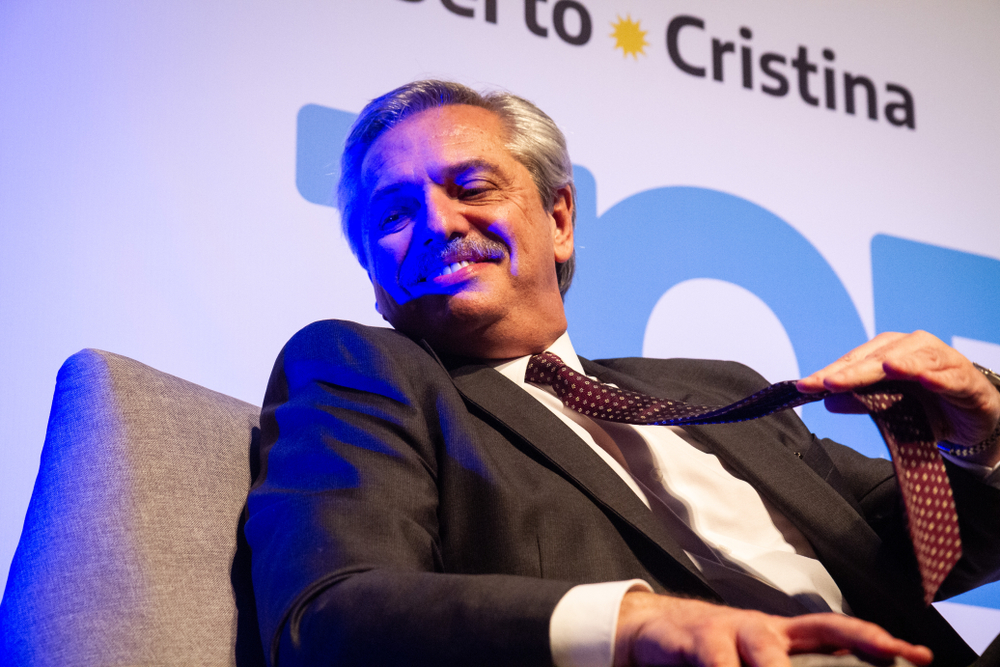 We wait for what comes next.

The nation is like a family that’s been plagued with pain. The poor folks have suffered from one bad thing after the next. Divorce, job loss and disease… The community around it keeps its distance and wonders what more could go wrong. People whisper about its fate in church.

The United States has been through a pandemic and deadly riots, and, oh look, a decisive election is on the horizon. What else can there be?

If they’re intelligent beings, the aliens will drop in, grab all of our Hershey bars and head back to whence they came.

This mess is best watched from afar.

As the country debates the notion of defunding the police and the legality of making face masks mandatory, we rub our head and worry what comes next as our slippery slope turns into a steep cliff.

The latest news from Argentina is surely a clue…

“It is not in anyone’s plans to be expropriating companies,” the country’s President Alberto Fernández said on Tuesday. “I’m not ashamed to say that I am a capitalist. But when capitalism became financial, it lost ethical content.”

We hope the words are wrong… that his last line was poorly translated by some lazy, state-employed sap.

Perhaps what he really said was, “When capitalism became ethical, it lost its financial content.”

Fernández was forced to denounce the ethics of turning one dollar into two just hours after his team announced it will take over Vicentin, the country’s massive crop house.

As we’d expect in an age of tariffs, farm bailouts and global deflation, the huge soybean processor has had some tough times. It defaulted on $1.5 billion in debt last year and was forced to file for bankruptcy.

The government won’t stand for the market clearing its dead.

It’s too painful… and it’s hell on votes.

“There’s a certain belief, especially among independent and small producers who have been quite damaged by Vicentin’s failure, that the company needed to be saved in some way,” said one of the country’s leading political advisors.

Ah… now the true translation above is getting clear.

“When capitalism became political… it lost its ethical content.”

That makes much more sense and mirrors what anybody but the state-dependent masses can see today.

The country’s leaders say the move is about saving jobs, protecting the nation’s massive soybean industry and shoring up its food chain (not that anybody ever sits down and eats a plate of delicious soybeans).

But the folks on the front lines see things differently.

They fear a state-run firm will distort the market, give Vicentin an edge over the competition and pay workers far more than the fair market wage (again… buying votes).

“Is this going to be simply a rescue,” one analyst asked of the situation, “with the company working largely as it used to, or will the government accept running it at a loss as a price to pay for a bigger state footprint in the grain and currency markets?”

He didn’t have to wait long for an answer.

The country’s Production Minister Matías Kulfas stood before the press on Tuesday to say the takeover is part of a “21st-century statist vision.”

He even kept a straight face as he said the move would “help to have more stability and avoid cyclical economics.”

We’re sure Paul Volcker chuckled in monetary heaven as he heard the words.

His living counterparts haven’t done the best job at quelling the “ethical evils” of capitalism or halting neckbreaking cycles.

That’s the idea that brings us from the politically plagued lands of South America to the much more sophisticated and capitalist-devoted realm up here in the north (we almost typed it with a straight face).

Uncle Sam is getting a piece of the airline industry.

It hardly made the news (too complex, we say), but as part of the $25 billion plan to bailout the mask-covered friendly skies, the Treasury has the chance to get a stake in the country’s major airlines.

It’s another nail in the coffin of the free market and American capitalism.

But the pine box isn’t finished yet. In fact, we may have to rip the thing apart and widen it.

That’s because it’s not just Uncle Sam hopping into the pilot’s seat. When we get our head above the dreary rain clouds over the nation and look around a bit, we see governments everywhere taking a stake in their leading airlines.

And, in news of the odd, China now has a nearly 13% stake in… Norwegian Air.

So if you’re keeping tally, over the last 12 years, our vote-addicted leaders have grabbed stakes in banks… carmakers… and airlines.

But, like we said, this slippery slope is getting very steep.

Argentina will take over its major soybean producer. It looks bad… at least to us. But for a government that’s worried about its meat-packers closing and creating a massive shortage, it is surely stirring a few greedy conversations in and around Pennsylvania Avenue this week.

So what comes next?

Momma always said we shouldn’t ask questions we don’t want the answer to.

Capitalism may be dying… but at least our stocks will continue to soar.

The government doesn’t invest in losers.