Is It Time to Buy or Sell This $11 Semiconductor Play?

It’s a story of indictments… conspiracies… and multimillion-dollar plea agreements.

In fact, it’s a rare chance to invest in a company that’s on probation.

But is there more room for it to go?

Our beloved and deeply trusted Liberty Indicator will tell the tale… 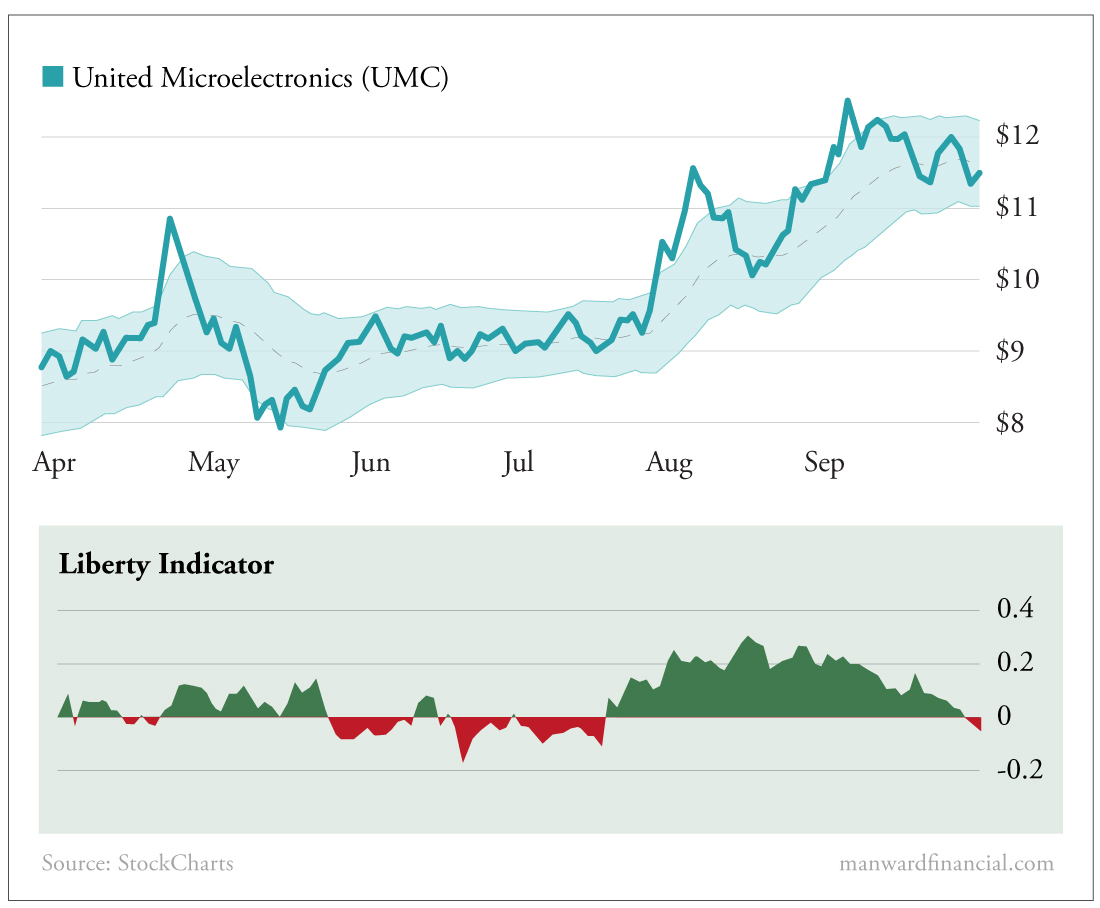 We picked this one this morning because it helps us answer two questions that we get quite often.

These are perhaps the most frequently asked questions we get when we speak at conferences and events.

At first glance, the idea makes sense. If buying pressure is in charge… the share price goes up. And if selling pressure rules the day… shares must go down.

In a perfect world, yes.

But, darling, this ain’t no perfect world.

Here’s why selling when the indicator turns red leads to trouble. In fact, you can see it in the chart above. In a secular bull market like the one we’ve been in for the last 12 years, the short-term downward pressure on stocks is often not enough to warrant selling.

In other words, yes, we may be able to avoid a quick dip when selling… but we’re also likely to miss the next run higher.

Unless our timing is perfect, the opportunity cost of selling is simply too large.

There is a caveat, though. There are two, in fact.

First, this rule applies only to stocks that we currently own. And second, it gets tossed out the window if fundamentals change.

We’ll start with the latter idea.

Last Thursday, we wrote our Alpha Money Flow subscribers and told them to sell Navient (NAVI), a stock that had just gone from green to red. We’d held it for many months – taking option gains as high as 600% along the way.

The stock had gone from green to red a couple of times before. If we had sold it last June, at the last crossover, we would have missed out on a 20% run that started just weeks later.

By holding, we locked in a gain of more than 40% on the stock.

We sold last week, though, because the stock’s fundamentals changed, well, fundamentally.

Thanks to meddling by the federal government, the company joined a growing trend and exited a key business line – federal student loans.

It was no longer the stock we’d bought months ago… so we took our profits and ran.

But what about our second caveat… and the chart above?

Like we said, the idea that we discount the crossover from green to red applies only to stocks that we own. If we’re looking to buy, we stay away until we get the crossover. That way, we’re buying into a confirmed upswing.

The company shown in the chart above – United Microelectronics (UMC), a major Taiwan-based semiconductor company – has had quite a run over recent months.

The chart is telling us that it may have been too much too soon.

In this case, investors had plenty to be bullish about… a semiconductor shortage, surging demand and a plea deal in an intellectual property case that had been hanging over the company for three years.

Once the price action cools off a bit, UMC will once again be a buy. The fundamentals are strong.

Patient investors will get a bargain – and a stock in a confirmed uptrend – if they simply wait for the Liberty Indicator to turn green again.

If you want it… hold on.

Patience is a moneymaker.

What stocks do you want us to analyze using the Liberty Indicator? Drop us a line at mailbag@manwardpress.com.