They can be swift and painful. But they don’t need to be.

We’ll let somebody else spew the same old tripe that sell-offs are buying opportunities. You already know that.

It’s been made quite clear in recent years that buying on dips is an easy way to boost your profits.

What few folks will tell you, though, is exactly when to buy.

How in the world do we know when we’ve reached a bottom?

How do we know when the rush of selling has stopped and buyers are back?

We don’t, of course. Nobody knows. But there’s a trick you can use that will help put the odds significantly in your favor.

You’ve probably already heard of it… but we bet you’ve never thought of using this trick in quite this way.

But most folks don’t know that trailing stops work on the buying side as well as on the selling side.

If you’re the kind of person who drools over a market crash… you’re going to like this.

It’s pretty simple to understand… and even simpler to put to use.

You see, when we look to buy into big market corrections, we don’t look to buy right at the bottom. It’d be nice, but trying to predict such things is dangerous. You’ll be wrong far more often than you’re right.

That’s why we look for some sort of confirmation signal.

You can use a host of technical indicators. We do.

But you can also use – you guessed it – trailing stops. Again, they’re not just for selling.

Here’s how it works…

Break It Down, Andy

The key to understanding trailing stops is to lock in on the idea of the “best price.” On the selling side of things, the best price is the stock’s highest price while you owned it.

But when you’re looking to buy, a stock’s best price is its lowest price.

For example, let’s say Manward Global Enterprises is selling for $100 per share… but then we go and accidently insult some nut who gets offended and wants to “cancel” us.

We’re sweating… but you know our mission is too strong to be stopped. You decide you want to buy more shares while they’re cheap.

But you want to buy only when it’s clear we haven’t insulted anybody else.

You would do that by setting a trailing stop that automatically buys once the stock has rebounded by, let’s say, 5%. (You could use any percentage, but 5% is a strong rebound indicator after a sizable dip.)

As the stock falls, the trailing stop moves with it.

But as shares start to rebound and the bulls come back, that low of $80 becomes the “best price.” It’s what controls the stop, which now doesn’t move.

When the stock hits $84, it will have risen 5% from its lows and you’ll know it’s likely in the midst of a recovery. You can jump in and ride the stock all the way back up to $100 per share… where we’ll likely say something to get ourselves in trouble again.

These sorts of trades are simple to make. 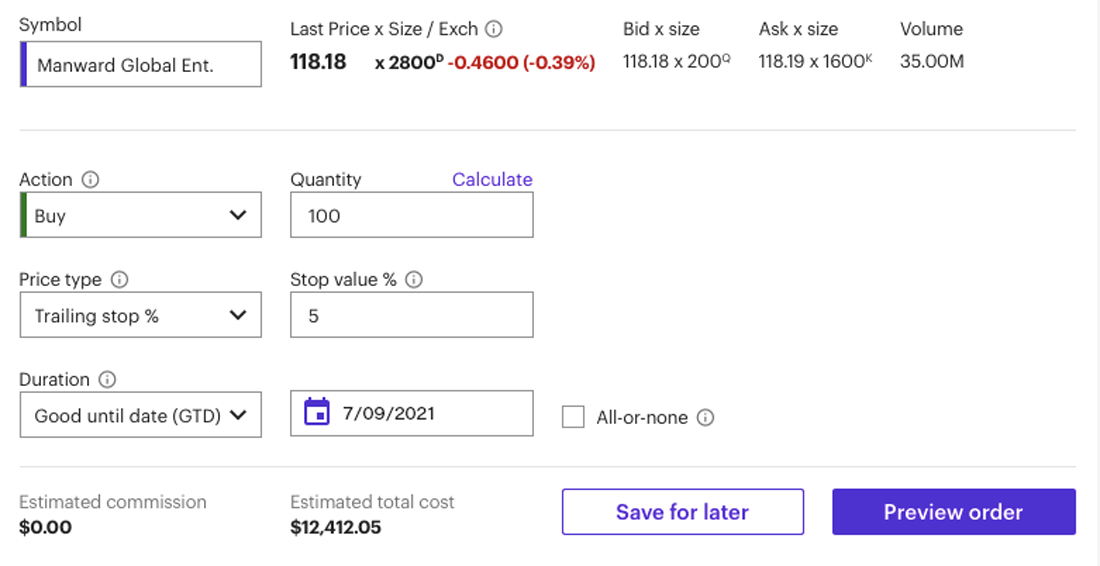 Just select the trailing stop percentage, enter the number you’re comfortable with and then be sure to set the trade’s duration to “good ’til canceled” (GTC) or set an appropriate date a few weeks out. (It’s unlikely you’ll want to keep the order for only a day or two.)

And remember, this is the sort of entry you want to make only when the market is in a bit of a panic. It’s not for everyday trades.

It’s an ideal way to push emotion out of your trading and enter good stocks at good prices, when they’re likely to be on their way back up.

It’ll give you a good reason to look forward to a nasty correction.

How to Properly Value a Stock

What you’re about to learn could alter everything you know about investing.

It’s the math behind every successful investment.

There is a ton of money up for grabs… and the biggest deals are yet to come.

The space race is heating up… If you’re interested in gaining some exposure to this new frontier of investing, this ETF is worth a look.