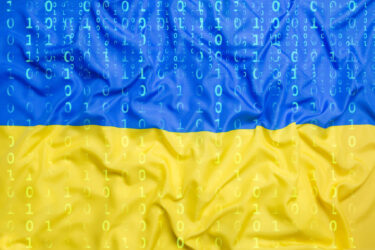 Something odd just happened in the war in Ukraine.

History tells us this move is quite unsurprising. But the timing and foreshadowing have us scratching our head.

The country just unveiled the concept for a new digital currency. It’s called the e-hryvnia. It has a sole mission… to replace paper money.

War offers a grand cover for the move… both in Ukraine and here at home.

Final details are not set yet, but it appears the government has a few goals in mind.

Of course, Ukraine wants this new central bank digital currency (CBDC) to be the center of its digital economy and seamlessly tie to other digital assets, including cryptocurrency.

What’s most haunting about the plan is the notion of a “programmable” currency. It would allow the government to add and subtract money through smart contracts – programs that are triggered automatically when predetermined conditions are met.

The National Bank of Ukraine says it would help with the implementation of “targeted social payments.”

If that sounds scary… good. Your gut is in tune to all that could go wrong with such an economically unsound idea.

The last angle with this (and an aim of almost all similarly planned digital currencies) is smoothing cross-border payments.

With many eying up a new world order when it comes to monetary power, this is something to pay attention to. Whether it’s Russia teaming up with China to put gold back in banks or the Saudis doubling down on the value of the oil under their feet… this idea is very much in flux.

But here’s what’s worth pondering in all of this…

If America is running a proxy war in Ukraine… why wouldn’t it also run a proxy currency experiment?

You see, just as Ukraine announced its plans for a CBDC (in the middle of an all-hands war, we’ll remind you), the fine folks in Washington started ramping up a project of their own.

And its goal… is to smooth out those aforementioned cross-border payments.

Project Cedar is chapter two in Washington’s push for a digital currency. And for obvious reasons, it’s not talking all that much about it, despite its first stage successfully ending just weeks ago.

Can you imagine what would happen if Jay Powell gave a nod to the idea of “atomic” payments next week? The global markets would buckle.

But if we start by funneling billions of proxy dollars to Ukraine… well, golly… we’re doing it to support a country that’s being invaded by our enemy.

And if that’s not good enough to get you thinking critically about all of this, here’s some news out of Great Britain: It’s working with Ukraine to create digital identities.

During a war, showing your papers can be a tough thing to do.

With digital tracking… it gets a whole lot easier.

Remember, it was Ukrainian President Volodymyr Zelensky who campaigned on a dream of a “state in a smartphone.” He even named it Diia, which translates to “the state and me.”

His dream is coming true.

Indeed, the folks in power never let a crisis go to waste.

We can’t wait to see how all this will be brought to the United States.

Note: For more of our thoughts on what really could happen with the Fed next week and what devastating effects it could have on your money… click here.