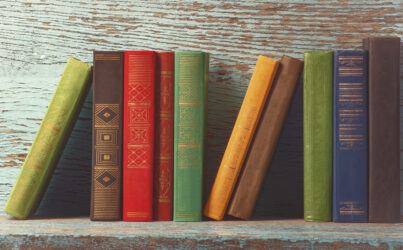 We’ve quoted a lot of folks in these pages… but we’re not sure if we’ve ever quoted Mr. Groucho Marx.

As we dive into our latest book review (disguised as a holiday shopping guide), we’re finally going to…

“Outside of a dog,” the oddball actor once said, “a book is man’s best friend. Inside of a dog, it’s too dark to read.”

Ernest Hemingway, who we know we’ve quoted, fiddled the same tune. “There is no friend as loyal as a book,” he said.

And in an analogy that really hits home with us, Marx compared the virtues of TV (which, of course, paid his bills) to the value of a book.

“I find television very educating,” he said. “Every time somebody turns on the set, I go into the other room and read a book.”

With that, we’ve got our latest reading list for you. We asked our team for their most recommended read. Use this list for yourself. Use it as a holiday shopping list. Or use it to sound smart at a boring Christmas party.

We’re pushing a book that should be required reading for every American who wants to graduate high school… or vote.

Everybody Lies by Seth Stevens-Davidowitz is about data and what it says about us. It takes a look at the information gathered by behemoths like Google, Amazon and Facebook and dissects it, drilling down into the truth… the truth about how we really think, where we really spend our money and even why we lie about who we voted for.

We often say that Manward “pulls the veneer off of everyday life.” We go beneath the gilded surface to examine the ugliness below.

This book does the same – masterfully.

It’s a must-read for investors. It’s a guidebook for navigating a world of BS.

You’ll make better financial decisions once you learn how to find the truth and discern who is lying to you… and why.

It’s our No. 1 book for anybody who thinks things are a bit askew.

We weren’t all that surprised when we asked Alpesh Patel for his No. 1 must-read. He talks about the book’s author often.

I love this book. When I was a visiting fellow at Oxford University, I lectured on behavioral economics – where economics meets psychology.

I spoke about the groundbreaking research by Daniel Kahneman. He became the first non-economist to win the Nobel prize in economics.

This book is about his and Amos Tversky’s research on why smart people make stupid money decisions and the many ways the mind fools itself. I read it this year and can’t recommend it enough.

The book traces Tversky and Kahneman’s work with the Israeli army and covers experiments on how humans behave under uncertainty, why so few possess the mindset for immense wealth, and common mistakes people make.

On a side note… we believe behavioral economics should also be required coursework for every high school graduate. It’s powerful stuff.

We’ll admit… we started a bit of an in-office wager when we asked Joel for his must-read. We tried to guess which year the work was published in.

The Visionary’s Handbook: Nine Paradoxes That Will Shape the Future of Your Business was written by Watts Wacker, Jim Tayler and Howard Means and was published in 2000.

Here’s what Joel had to say about it…

Since my official job description here at Polyface Farm is now Chief Visionary, I found this book compelling on several fronts.

When I started as an entrepreneur 50 years ago, I didn’t think I was a visionary. I just wanted to have a successful farm business.

But somewhere along the way, people started telling me I was a visionary.

I found this book both affirming and challenging. It’s full of gems that help us appreciate the problems that come with creating vision statements and planning for the future.

For example, the book says, “The more successful you are at predicting the future, the more you destabilize your present in every way.”

It’s a great handbook for stimulating our imaginations and challenging our assumptions. I liked this adage as well: “More often, though, failure in the future is a result of inadequate imagination in the present.”

One extremely helpful passage is about asking questions to ascertain what is likely to develop in the future.

“Predictions… are answers to questions about the future. It’s the questions that count… The role of the visionary – the role you will soon assume – we came to understand wasn’t to be a seer, but to be the provocateur: to present a series of visions of the future against which those who want to prepare for the future can react.”

It’s an easy read, with lots of real-time stories – the kind of book you go back to a year later to refresh your memory about certain key points that can help you be a better you. And be more effective, whatever your vocation.

We love putting these lists together. This is one of our favorite columns to write.

It costs us, though. We just ordered a new book we haven’t read.

We hope you do too.

Note: Send us your must-read books. Email us at mailbag@manwardpress.com.