How to Find a Good Buyback Stock

They’re one of the most powerful moneymaking forces on Wall Street… share buybacks.

A result of loose monetary policy and a go-nowhere economy, new buyback plans are announced nearly every day.

But how do we tell a good one from a bad one?

Over the next three years, the company will buy $20 billion worth of its own stock and permanently remove shares from the market. It means every remaining share will be worth that much larger of a slice of the annual profit.

Moves like this aren’t new for Walmart. Last year, for example, the giant retailer bought 19 million of its own shares, shelling out $2.6 billion.

Thanks to a quite strong year that generated $36 billion in operating cash flow, the company had more than enough excess cash to hand over to investors… and still maintain its promise to grow the business.

But if you tuned in to the company’s conference call last week, near the end you heard a question that nearly every buyback-focused management team has been asked in recent months.

Here it is… from Robert Drbul, an analyst at Guggenheim:

With the cost of debt being where it is, can you talk a little bit about your willingness to perhaps maybe take on some debt for additional share buyback?

It takes us to the first step of analyzing a company’s buyback plan… determining how it will pay for it.

The company has two options… cash or debt.

In this case, Walmart’s CFO Brett Biggs didn’t quite answer the question – at least not directly. He simply pointed to the company’s cash stockpile and said he’ll remain “aggressive” with buybacks. The assumption is he’ll use excess cash, but with interest rates dirt cheap, he certainly left the door open to borrowing.

That’s what Apple (AAPL) is doing, after all. It recently borrowed $14 billion… and the assumption is much of it will go straight to buying the company’s stock.

Either idea is fine. Apple can certainly afford to borrow at the ultra-low rate of 3% and still have the capital needed to expand its business as appropriate.

Walmart, on the other hand, is on the fence. Its margins are much smaller, and its business growth depends on capital expansion. It needs expensive new stores and warehouses to grow.

Right now, many companies are using debt to fund their buybacks. Many of them should not be.

To sort the good from the bad, use a company’s cash flow statement and its balance sheet.

A heavy debt load is not a bad thing when interest rates are this cheap… as long as cash flow easily covers it. Ideally, look for cash-rich businesses that show a good mix of cash and debt.

The second indicator we use is far simpler…

Going Up… or Down

Remember, not all buyback plans are created equally. You’ve surely heard about the problems of corporate teams dishing out massive amounts of stock options through incentive plans.

Yes, they give executives a very big reason to hit key benchmarks, but when these options are exercised and converted to shares, they can be quite dilutive. They put a lot of new shares on the market… the exact opposite of a buyback.

It means each share now represents a smaller piece of the profits.

Corporate boards, of course, know this. That’s why they’ll use the company’s cash stockpile and, quite often, debt to fund a buyback program. Their aim is to have the dilutive nature of the options and the buybacks cancel each other out.

In this scenario, executives get the mine and shareholders get the shaft.

It’s nearly the equivalent of shoveling corporate (i.e., shareholder) cash right into the pockets of executives.

To test for it, we merely need to measure the number of shares outstanding over time.

With Walmart, we can clearly see the number of shares is falling… 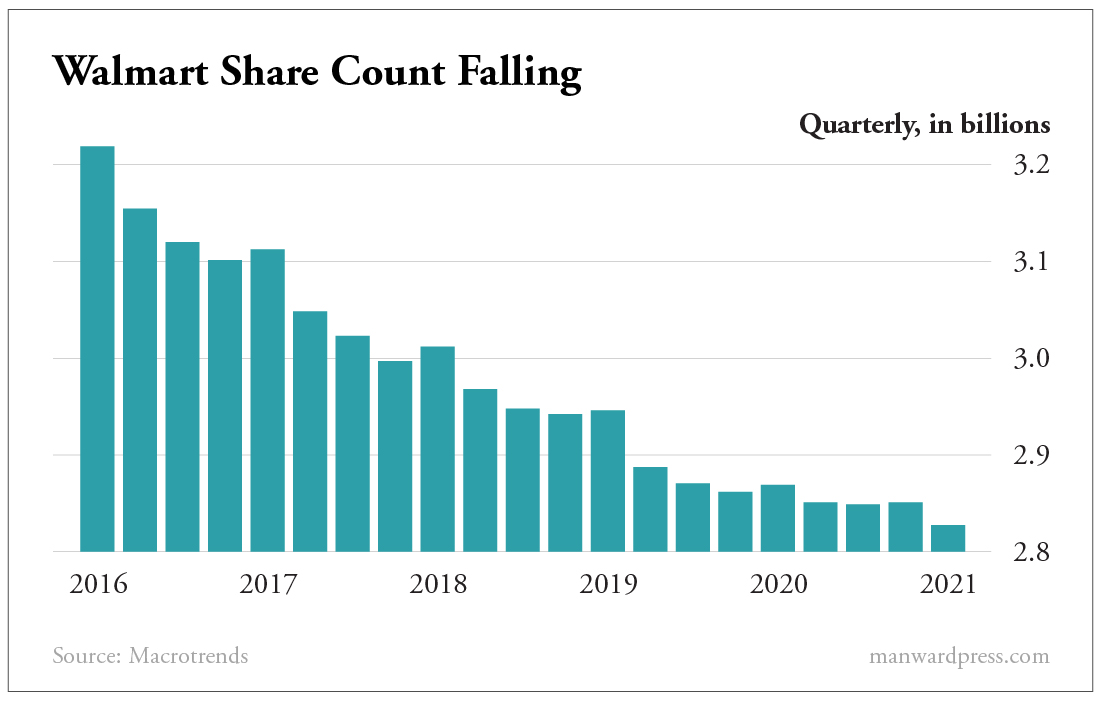 That’s not the case with Global Payments (GPN). Despite boosting its buyback plan in 2018, the company has increased its share count greatly over the last few years. 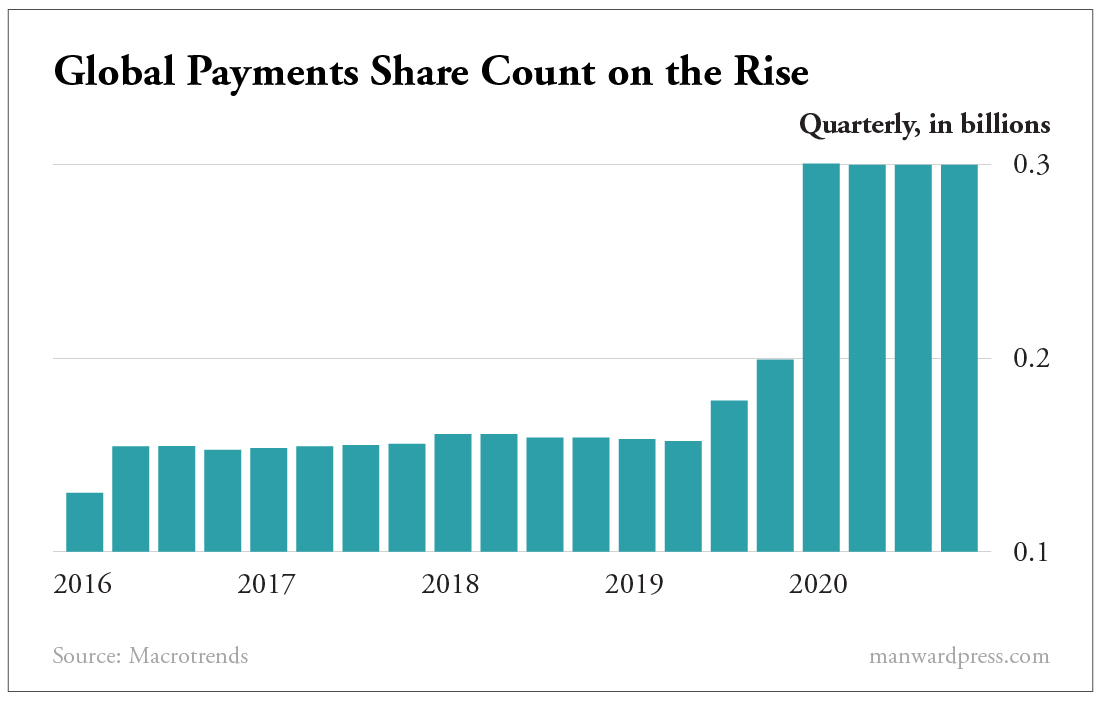 It should have us discounting the effect of the company’s just-announced $1.5 billion buyback plan. We should much rather invest in companies with falling share counts. They’re the ones moving the market higher.

It’s no secret that buybacks have fueled some of the market’s biggest movers.

Look for companies with fresh plans, do a bit of research… and buy up the good ones.

You’ll be rewarded for the effort.

P.S. If you’re looking for a good pre-IPO opportunity that ANY investor can get into… we’ve got it. Check out this huge “6G” opportunity. But hurry… this privately owned company could trade under its new ticker symbol as soon as April 1. Click here.

Do you have questions on how to find buyback stocks? Send them to mailbag@manwardpress.com.