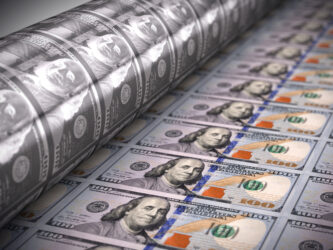 As usual, the herd of blind retail investors has gotten things wrong… and the headlines, which lure them in the wrong direction, offer no help.

All eyes are on the Fed and its rate hikes.

But it’s like looking at the traffic 100 miles in front of you. By the time you get there… things will have changed.

It takes months, if not years, for the full effect of quickly surging hikes to spread through the economy.

“The Fed is breaking things,” another analyst said. “These aren’t healthy moves.”

What they’re talking about happened mostly behind the scenes. It’s too complicated for the headline writers and too boring for the talking heads.

But it’s critical. The fate of our money depends on it.

We’ve all heard of the Fed’s “pivot.” Everyone is speculating about when Jay Powell and his team will flatline rate hikes and start pulling down key interest rates.

Interest rates are important variables, no doubt. But again, focusing on them is like looking at the traffic in Dallas while sitting at a light in Tucson.

Things will change in the time it takes to get from here to there.

We need to be looking somewhere else… where there are increasingly loud warnings of trouble and fierce speculation about a pivot.

A Long Way to Go

You’ve heard of quantitative easing. It’s been the modus operandi of the Fed for over a decade. It’s the idea that when times get tough, the Fed prints money by purchasing Treasurys, mortgage-backed securities or any of a host of other assets.

It’s a simple process. Instead of selling Uncle Sam’s debt to the average person or company and using money that’s already flowing through the economy, the Fed buys assets using brand-new money.

It adds cash to the economy and juices things up.

During the pandemic, the Fed pushed nearly $5 trillion into markets this way.

But now, as you may have heard, it’s doing just the opposite. Quantitative easing is dead. Quantitative tightening has taken its place.

In this scheme, the Fed takes the money it earns from its assets and burns it. When a Treasury pays interest or matures, for example… Powell and his crew toss the cash in the burn barrel, pulling it out of circulation.

Just like that… there’s less money to go around.

You can see the scale of things in the chart below. Lots of easing, but not much tightening. 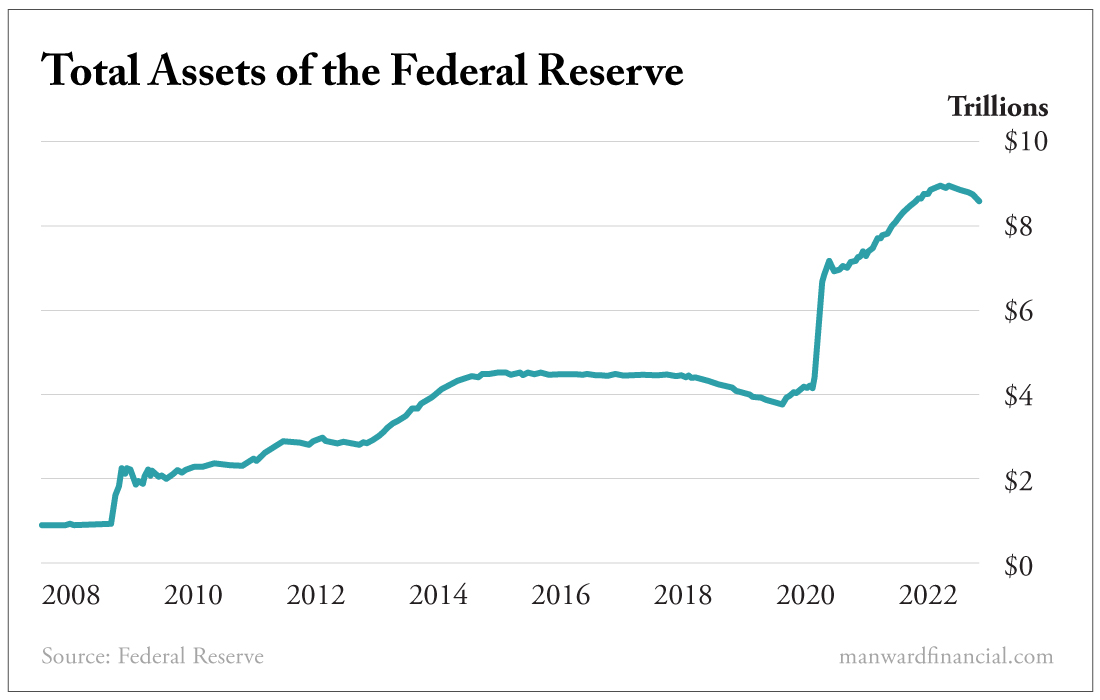 Total Assets of the Federal Reserve

The poor folks in charge of such things are learning it’s a lot easier to print money than it is to burn it. The Fed’s balance sheet has fallen by just $381 billion from its peak, set in April.

It has a long way to go to evaporate the $5 trillion or so it printed a couple of years ago.

But even the little the Fed has done is creating pain… immense pain. The markets the Fed has “dabbled” in over the last decade are now facing severe liquidity crunches, with premiums on newly issued Treasurys running at multiyear highs versus existing Treasurys.

As one analyst put it, if the Fed runs down its portfolio too much, it will break something in the market. And if it doesn’t, we’ll be stuck with inflation.

The Fed says it is sticking to its policy and will burn $95 billion a month. But the market is not buying it. Most projections have the Fed not just pivoting away from tightening by early next year… but actually getting back into the easing game once again.

So if you think this saga is over and that some dovishness on rates is reason enough for a rally… think again.

This battle with inflation is far from done.

Pay attention to what’s happening behind the scenes. It’s not pretty.