Interest is up… the stock market’s down… and you only get mugged if you go downtown.

Music fans will know those aren’t our words. They’re the lyrics of a hugely popular song that was first released in 1982.

They’re as true today as they were 40 years ago.

At least at first glance…

If we dig deeper, we see a much different picture. Understanding the contrasts between then and now will help us see what’s really going on in this market and what’s most likely to come next.

In 1982, of course, the interest rate situation was the opposite of what it is today. The monstrous hikes were in the past, and rates were starting to slide.

The slide hasn’t stopped since.

The stock market in 1982, though… it was indeed as painful as the song says. A yearlong recession had pulled about 20% off the Dow.

But that’s a shortsighted look at things. From July to November of 1982, stocks made back all they had lost. They roared higher… and they didn’t stop roaring until the collapse of the dot-com bubble in the late 1990s.

The boom makes the bust in the early ’80s look tiny… 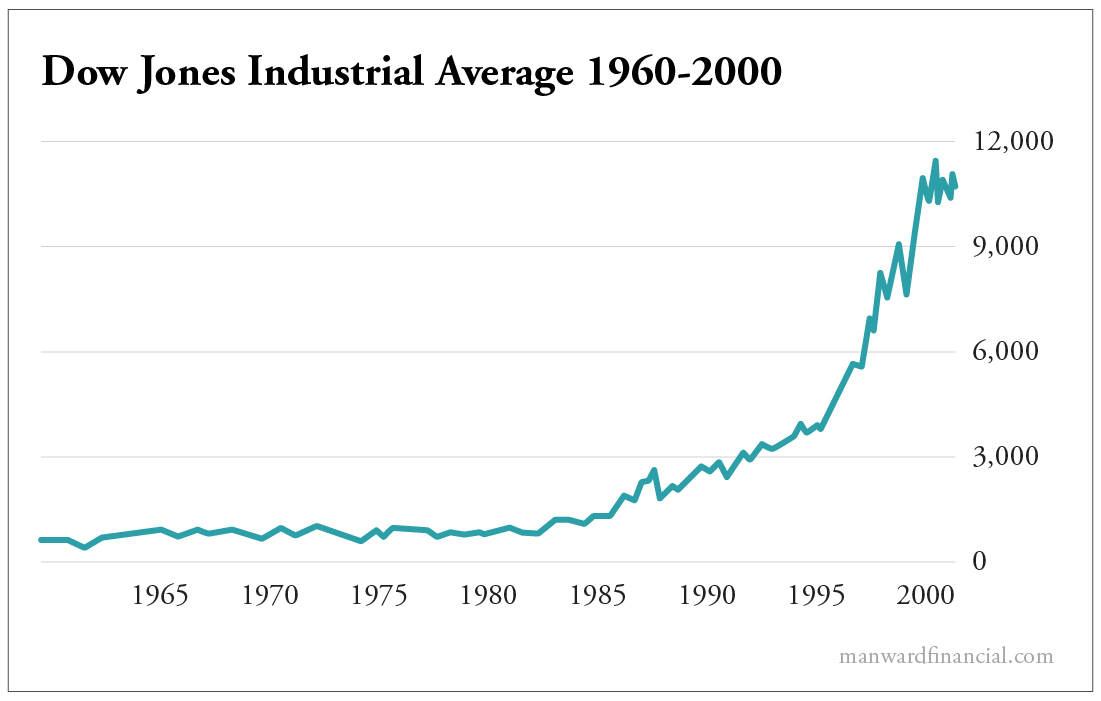 But charts are deceiving. They tell the truth… but they rarely tell the whole truth. For that, we must do a bit of ciphering. We need to add in a little devil known as inflation.

After all, a thousand bucks might get you the same slice of the Dow now as it would have in 1982, but if a grand isn’t worth a grand, then neither are the stocks it buys.

See what we mean? 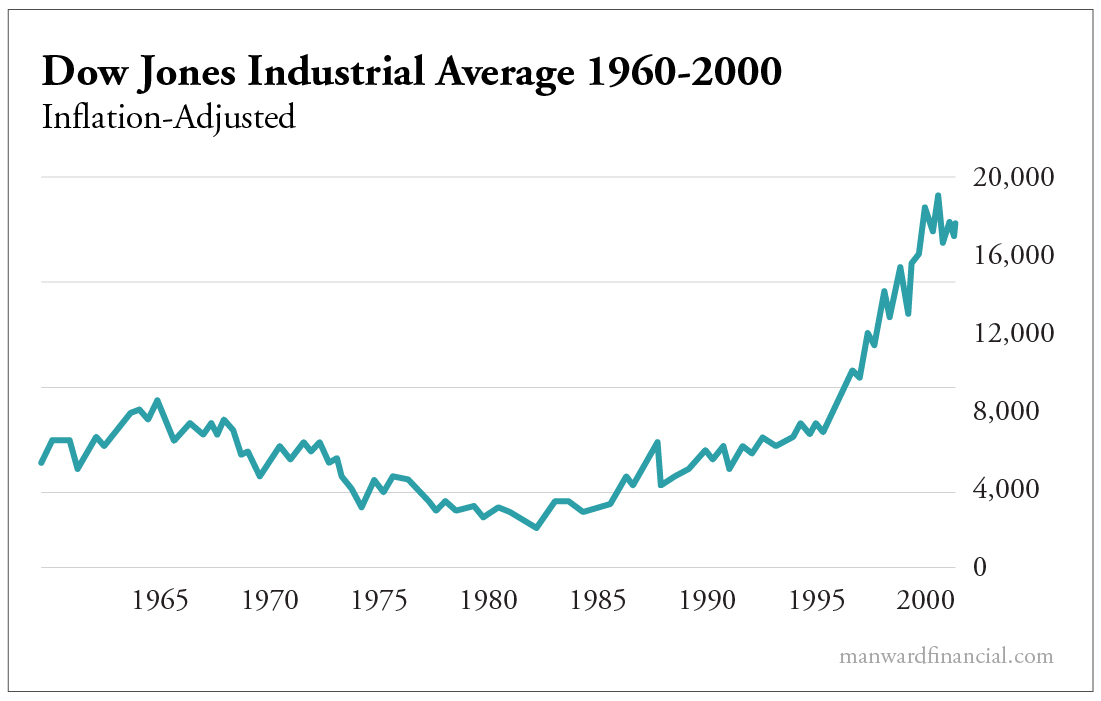 This chart measures the same thing as the chart above – the Dow. But this time it adjusts for inflation.

Using constant buying power, we see the incredibly painful effects of surging inflation. The Dow, which climbed higher in nominal terms during the ’60s and ’70s, actually lost well more than half its value over those years in real terms.

Ouch. It was a painful few decades.

Of course, if we show you a chart of interest rates during that same time, you’ll see a picture that’s nearly the inverse of the inflation-adjusted chart above. 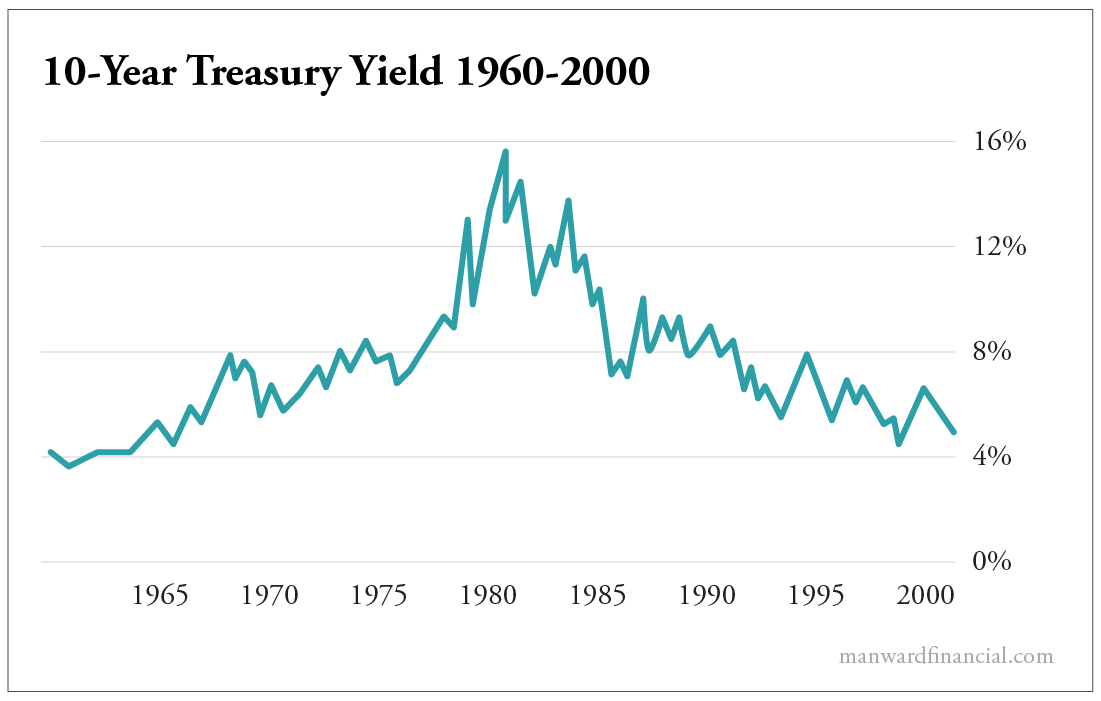 We can clearly see the death of interest rates in this chart. It corresponds perfectly with the huge boom in stock valuations.

These are the charts that drive the market. They always have and they always will.

That’s why the Fed’s next few moves are so important.

That is the mainstream view.

Like most things mainstream, it’s far too simple. As any fisherman will tell you, the spoils of the river aren’t found in the big current… they’re found in the eddies, the rifts and the seams along the edges.

The truth is, our economy is far different from how it was in the 1970s and 1980s. Back then, gold and the dollar had only just been separated. They were still close enough to see eye to eye.

These days, that’s not the case… at all.

It’s led to decades of massive debt growth on all levels – corporate, personal and government.

All of it is interest-rate sensitive.

That’s why markets are panicking as rates merely rise back to where they were before the pandemic… when they were still considered absurdly low and quite accommodative.

Lots of folks are talking about four, five or even six rate hikes this year.

It’d be a disaster.

With the leverage in our economy today, just two 0.25% hikes would have an effect on the economy equivalent to that of an 8% or 9% hike 40 years ago.

Five or six hikes won’t happen. The Fed will back down after a hike or two. It must.

That means we’re a buyer… an eager buyer.

The market has fallen for Powell’s bluff, convinced that rates are turning around.

Forty years of history and trillions in fresh debt prove they aren’t.

Don’t be afraid to buy into this bearishness. It’s where profits are made.