Money is a funny thing.

Most folks work all their life for it… and yet they don’t understand it. They know more about who kissed who last night on Reality Island than they know about the stuff they’ve devoted their lives to.

These days, we reckon, that’s probably a good thing.

If most folks knew what was really going on in the realm of money, our nation would suddenly be filled with babies.

The average American would suck his thumb and wet his pants.

Of course, you’ve probably heard about what’s happening with interest rates. We picked up The New York Times last week and saw a glorious headline… the fruition of an idea we first wrote about nearly a decade ago. 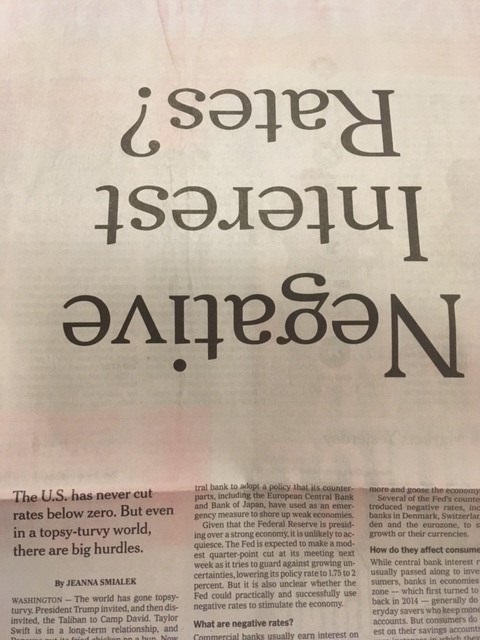 The idea of money is in big trouble.

Interest rates across the globe are upside-down and are sinking with each passing day. The trend is simple proof that the markets – and the governments that bind them – believe money is now worth less with each tick of the clock.

That’s scary… at least if you have some money.

We were out to dinner with several investors last week when the topic came up.

One of the men had relatives who lived in Cyprus in 2013… you know, when the government swooped in and took cash out of every bank account.

It created a panic throughout the country.

The government couldn’t pay its debts, so it stole cash from its citizens’ bank accounts.

We imagine there was a lot of thumb-sucking and bed-wetting the night folks learned banks would take a holiday and the biggest savers (those damned fools) would see nearly half their money gone when they reopened.

Again, that’s what happens when governments spend money they don’t have – they steal it from the folks who do.

Most folks say that sort of thing will never happen in America.

We beg to differ.

Actually… the president begs to differ.

Now, we haven’t been trained in the education system’s “new math” system. We still do our ciphering the old-fashioned way.

But the way we see it, negative interest rates get us to the same destination as those desperate bank “haircuts.”

At least in Cyprus, the government had the balls to be honest about it.

Right now, some $17 billion worth of debt across the globe trades with a negative interest rate. And it’s coming to America.

Trump wants it. The Fed clearly wants it. And even Alan Greenspan said it’s a sure thing earlier this month.

The implications are clear.

It’s no different from the government stealing money from your bank account.

When the Treasury issues debt with negative rates, investors will get less than they deposited – just like they did in Cyprus. And when the government uses that debt to pay off its other debt (interest payments will be 10% of Washington’s budget next year), it’ll be no different from Cyprus using its citizens’ cash to pay off its massive IOUs.

The only difference – and this may be the silliest part – is that the American program is voluntary.

Washington won’t close the banks and steal your cash. It won’t need to. The sheep will be lined up at the barn waiting to get in.

They don’t know any better… and besides, Washington’s barn, as Trump has said in other recent tweets, is the prettiest barn on the farm these days.

It’s just like we told a crowd of investors last week when we held up a thick, hardbound book that detailed the history of interest rates.

It’s the most important knowledge an investor can have these days.

From ancient days to the Fed’s ominous moves in 2008, they’re all in that book. Read it closely enough and the next few unwritten chapters become quite clear.

And they’re not good.

The money world is upside-down.

The government needs your cash… and it’s no longer willing to pay for it.

I’m convinced a big announcement will come out of Washington on Wednesday afternoon. It will be the start of a long and dangerous trend that could launch a cash-confiscation scheme here in America.

That’s why we released a critical special report. It details the steps you must take right away if you want to sidestep what’s ahead. Click here for all the details.

How to Properly Value a Stock

What you’re about to learn could alter everything you know about investing.

It’s the math behind every successful investment.

There is a ton of money up for grabs… and the biggest deals are yet to come.

The space race is heating up… If you’re interested in gaining some exposure to this new frontier of investing, this ETF is worth a look.