That phrase is used to describe the sluggish price growth of large companies.

There’s a lot of truth to it. For instance…

A large company like Merck & Co. (MRK) would need to add $200 billion to its market value in order to double in size.

Compare that with a smaller company like Crocs (CROX), which would need to add only 4.5% to its market value to do the same.

Unsurprisingly, Merck’s value has barely changed in the past year. Crocs, on the other hand, has soared. 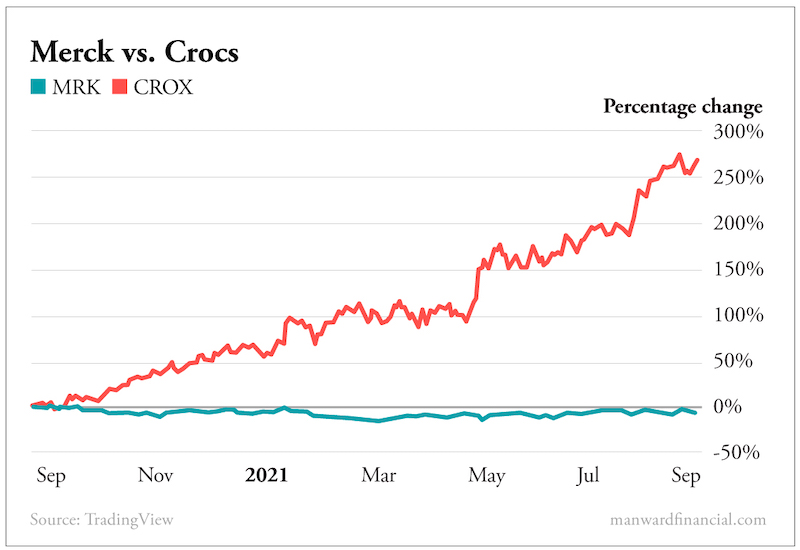 And yet, individual investors are strongly advised to hunt “elephants”… to stay away from smaller companies and buy only megacap stocks instead.

That’s what the big-name private investors are focused on, their brokers tell them.

If you follow that advice… it could cost you money.

According to research examining 700,000 individual investors’ accounts, private investors are more likely to buy attention-grabbing large caps (i.e., stocks in the news). And, remarkably, this holds true even after earnings warnings.

But that’s not the only reason that investors tend to overlook smaller companies.

(Note: I have a unique risk-reduction strategy – for stocks of all sizes – that I’ll share in a future essay.)

Believe it or not, a smaller cap company can offer a better return than a large one… with the same level of risk.

For instance, surprising to many, the smaller company A10 Networks (ATEN) has historically been less risky than blue chip Boeing (BA), according to their respective volatilities (17% for A10 versus 26% for Boeing). It should come as no surprise then that over the past year, little A10 has outperformed Boeing by a factor of two (60% versus 30%).

And small caps don’t move in lockstep with large caps. That means when you add small caps to your portfolio, they can reduce the likelihood of all of your stocks going down at once – while also maintaining your potential rewards.

So don’t waste your days hunting elephants. There is smaller, more lucrative game in the stock market jungle.

And with proper diversification, you can ensure you don’t get trampled.