Three Reasons to Be Bullish on the Market Right Now

Let the hand-wringing begin. Is the bull run over?

Let’s not forget that earlier this month, we got the latest earnings reports from the tech giants.

Between Apple, Microsoft, Amazon, Alphabet and Facebook, the performance was astounding. Revenues were up by $332 billion – a rise of 36%.

As you likely know, tech stocks have been the story of the pandemic, raking in money at stunning rates as economies around the world shifted.

So, despite their drop this week, my outlook on the market remains strong.

One of the most powerful – and growing – forces in the market is retail investors. They can’t be ignored. They’ve bought $400 billion in stocks since January 2020.

And in June, retail investors bought nearly $28 billion worth of stocks and exchange-traded funds, on a net basis. That’s the highest monthly total since at least 2014. It’s even more than retail traders spent in January, during the first meme-stock frenzy.

As the chart shows, since the start of the pandemic, retail investors are putting more money into the markets than ever before. 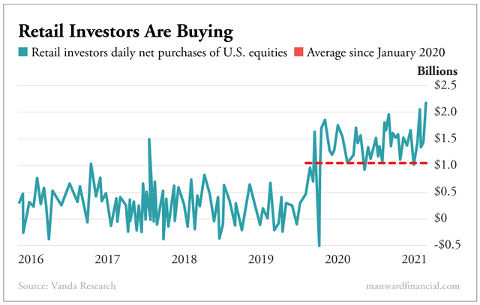 Their stock purchases are moving the markets in ways we’ve never seen.

While you won’t find me speculating on the next meme stock, this retail investing force is a big reason for confidence. As long as retail investors are buying, the market will continue moving up.

Now, I can’t guarantee the next 12 months will be like the past 12 months. But I remain confident thanks to what the British economist John Maynard Keynes called “animal spirits.” (The idea that human emotion drives financial decisions… the forerunner to modern behavioral economics.)

Folks are dying to spend. The flood of money into the markets makes entrepreneurs and businesspeople very happy.

Another bullish sign is that the market continues to move higher despite concerns over higher valuations.

Don’t get me wrong… I know that current price-to-revenue valuation metrics are at unchartered levels.

But that is why we don’t paint the whole market with one brush. We look for stocks that are not overvalued, unless their growth potential warrants it.

So what role does valuation play in the market? It comes down to individual stocks. Overnight, a major contract win can take a small cap company from overvalued to undervalued.

But valuation is only one factor. Growth, cash flow and consistency all matter.

One of the most significant factors in these record valuations is bond yields. Compared with the equity markets, bond yields are low.

More than $12 trillion worth of debt is trading with yields below zero. With U.S. inflation rates around 5% for June, bond yields have struggled to keep up.

For many investors, this leaves a stark choice: accept negative real returns on bonds or enter the booming equity market.

Therefore, the flows out of bond yields have been directed to global funds and funds that buy American, European or Japanese stocks. These funds have been pouring into the growth and tech sectors.

I expect this pattern to continue – and valuations to remain high – as long as rates are so low.

Another reason I’m bullish is that earnings are exceeding expectations.

As I taught my students at Oxford University, the stock market runs on expectations. These expectations are not always necessarily rational. But, either way, if they’re exceeded, prices rise.

Both first quarter and second quarter earnings results have overwhelmingly beat expectations. As of Wednesday, 87% of companies posted earnings beats for the second quarter. Of course, a rational mind would point out that this is compared with what was an absolutely devastating second quarter in 2020, but again… expectations are not always rational.

So don’t get nervous when we hit some turbulence like we saw on Tuesday. There’s plenty of evidence that this bull market is here to stay.