Nature and the Markets Abide by This Rule 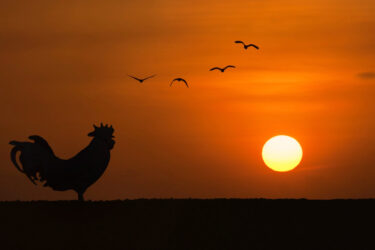 One of the most critical things about farming is time. I get up with daylight, work during the day and come in when it gets dark.

In the winter, that makes for fairly short days and long, sleepy nights. In the summer, it makes for longer days and shorter nights.

The sun comes up and goes down when it wants to. I can’t rush it or change it.

We are not always in control… and many things happen on their own schedule.

I can’t grow tomatoes until frost has passed for the season. A cow pregnancy lasts 9 1/2 months. Nothing in the world can shorten it or lengthen it. Chickens lay more eggs during increasing daylight and fewer eggs during decreasing daylight. It’s a fact of nature. I don’t know anyone who ever convinced a chicken to buck this trend. Sure, you can use artificial lights, but the principle still holds.

The cycles and seasons on the farm are similar to Adam Smith’s invisible hand of the marketplace.

Smith theorized that trusting the invisible hand was far superior to manipulating the market through arbitrary measures. The market adjusts, adapts and adheres to changing information as surely as the sun rises in the morning. And it does so on its own schedule.

Remember when correspondence took several days to move through the postal system?

I recently read a Charles Dickens book (Dickens is my favorite author) and was struck by many ideas in it that involved time. People sent notes. Visitors waited to be announced. People ate meals unhurriedly and called them a “repast.”

Have you taken a repast lately?

What I’m getting at is that we had a kind of “I’m not in control” understanding about response times until very recently. The same was true in other areas of life, from when it was time for a relationship to become intimate to how rapidly voters expected legislative relief on a political issue.

Contrast that with today’s expectation that everything will happen at warp speed.

Teenagers go into emotional meltdown if they don’t receive five “likes” an hour. Wait half an hour to respond to a text, and the other party assumes you didn’t get it.

We’re raising a generation on video games, in which all responses come instantaneously. Store shopping has given way to website browsing. Web developers say you have only five seconds to attract attention. That’s how short our attention spans have gotten.

Many traits define today’s young people in contrast to yesteryear’s, but certainly a big one is impatience.

Our techno-sophisticated society worships at the altar of speed. And as if speed weren’t enough, video games also give you control. If you do the right procedure every time, the outcome is predictable. Computers in general reinforce this notion. Punch this button and it gives the same response every single time. Total control.

Where am I going with all this?

I’m struck by the apparent inability of our society today to step back and let things play out.

In everything from energy solutions to climate change, we’ve become incredibly impatient. According to geologists, the U.S. has enough oil to last at least 400 more years. Does anyone think we won’t solve some of our most acute energy problems in the next 400 years?

Goodness, we went from open fireplaces to extremely efficient thermostatically controlled wood stoves in about 100 years.

That development alone multiplied the energy efficiency of wood. And now we can cut it with a chain saw rather than a crosscut saw.

Letting the market determine which technologies triumph reduces the risk of investing in the wrong thing.

Wanting a solution right now and believing we are in complete control is a recipe for a lot of wasted money and effort.

Government intervention, whether it’s to subsidize (insure) corn or give tax breaks for Teslas, skews the timetable and keeps us from testing and developing alternatives as we head toward solutions.

That is why the invisible hand is also a protective hand. We have a much higher chance of identifying the right solution if we let market forces dictate progress instead of artificially pushing through the only ideas we’ve had time to develop.

For fun, I collect expert predictions subsequently proven to be way off target.

In the mid-1940s, Tom Watson, the chairman of IBM, predicted that, worldwide, there was demand for fewer than a dozen computers. Aren’t you glad Steve Jobs didn’t listen to him?

A hundred years ago, top military brass couldn’t imagine a use for airplanes.

I have a stack of these.

The invisible hand takes time to play out. But that time element is what protects us from wasting resources by hurriedly turning to half-baked solutions to satisfy an impatient public.

The best thing for politicians to do is to get rid of arbitrary, manipulative, top-down intervention and let the invisible hand play out across the landscape – on its own time and on its own schedule.

That will lead to the best outcome.