Use This Vegas-Based Formula to Improve Your Risk Management 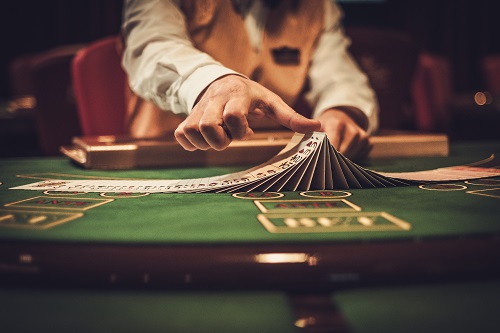 We have a moral issue with gambling. After all, one of our core beliefs is that wealth leads to Liberty. Therefore gambling leads to slavery.

Even so, we’re fascinated by the numbers behind it all. They’ve certainly guided our investment philosophy and made us a winning trader.

In fact, we’ve learned a lot from Edward Thorp – the math genius and professional gambler who turned the odds on Vegas and then revolutionized Wall Street.

Even though he spent years in the blackjack game, Thorp would argue he’s not a gambler. He’s an investor. He put down his chips only when the odds of winning were better than the odds of losing.

He won so much, he was kicked out of most casinos.

When Thorp put on disguises and taught others to do his work for him, Vegas changed the rules. With the math no longer in his favor, he took his skills to Wall Street.

It was a move that benefits us all… especially when it comes to managing our risk.

You see, there’s a secret of the Vegas blackjack tables that aptly applies to investing.

Thorp used it to know exactly how much to bet on each hand so he’d be sure to end up a winner.

But it worked equally well on Wall Street. It made Thorp a mega-millionaire – worth some $800 million today.

He taught it to Bill Gross (whom Thorp mentored) and Warren Buffett. It treated them well too.

It remains a vital risk-management strategy for all three.

We need just two important pieces of data to crunch the numbers.

First, we need our win probability – the “W” in the equation above. That’s the historic proportion of trades we’ve made that have led to a gain.

First, we gather the results of at least our last 25 to 50 trades – not the dollars made or the percentages lost, just whether they were gains or losses.

Simply divide the number of positive trades by the total number of trades.

From there… we need the “R.” That’s our win-loss ratio.

To get it, simply divide the average dollars gained on each winning trade by the average loss on each losing trade.

With just those two simple numbers, we run the equation and get our Kelly percentage – the percentage of our overall portfolio we should devote to each trade.

That means, if we continue to invest as we have in the past, the ideal percentage of our trading portfolio to devote to each trade is 10%.

Sticking to that number ensures that we won’t run out of money before we make significant gains. It virtually eliminates the threat of a losing streak wiping us out.

In other words, the Kelly criterion ensures we are appropriately diversified.

Of course, we’re not talking about our nest egg. The key to this formula is that it is only for our trading portfolio – it’s not to be used for a set-it-and-forget-it portfolio. After all, we wouldn’t have enough data to accurately enter into the formula.

Use the Kelly formula in your trading portfolio and quickly see its value. It will greatly lower your overall risk.

It’s a Vegas secret that works even better on Wall Street.

How much do you devote to each trade in your portfolio? Let us know at mailbag@manwardpress.com.