Why Crypto Will Continue to Soar

Which will make it to 100K first… Bitcoin or the Dow?

Our money, of course, is on both. But Bitcoin has stolen the lead.

The logic is simple and clear. Our government has gone from one that defends and protects to one that provides.

It’s an expensive notion. And, as our old crush Janet Yellen returned to Capitol Hill yesterday, it was the golden thread that tied her confirmation argument together.

We need to print more money, she said.

During Yellen’s confirmation hearing in front of the Senate, the former Fed chief and soon-to-be Treasury secretary called for “big” action – as in $1.9 trillion big.

“Over the next few months, we are going to need more aid to distribute the vaccine, to reopen schools, to help states keep firefighters and teachers on the job,” Yellen said. “We’ll need more funding to make sure unemployment insurance checks still go out and to help families who are at risk of going hungry or losing the roof over their heads.”

She knows Washington has dug a massive hole with its debt.

She has to. She printed the money that funded it.

She continued, “But right now, with interest rates at historic lows, the smartest thing we can do is act big. In the long run, I believe the benefits will far outweigh the costs, especially if we care about helping people who have been struggling for a very long time.”

When one hand of the government is grabbing money out of thin air while the other spends it, there’s no intent to ever pay that money back… at least not without the aid of the printing press.

It’s why a chart of the dollar looks so scary… 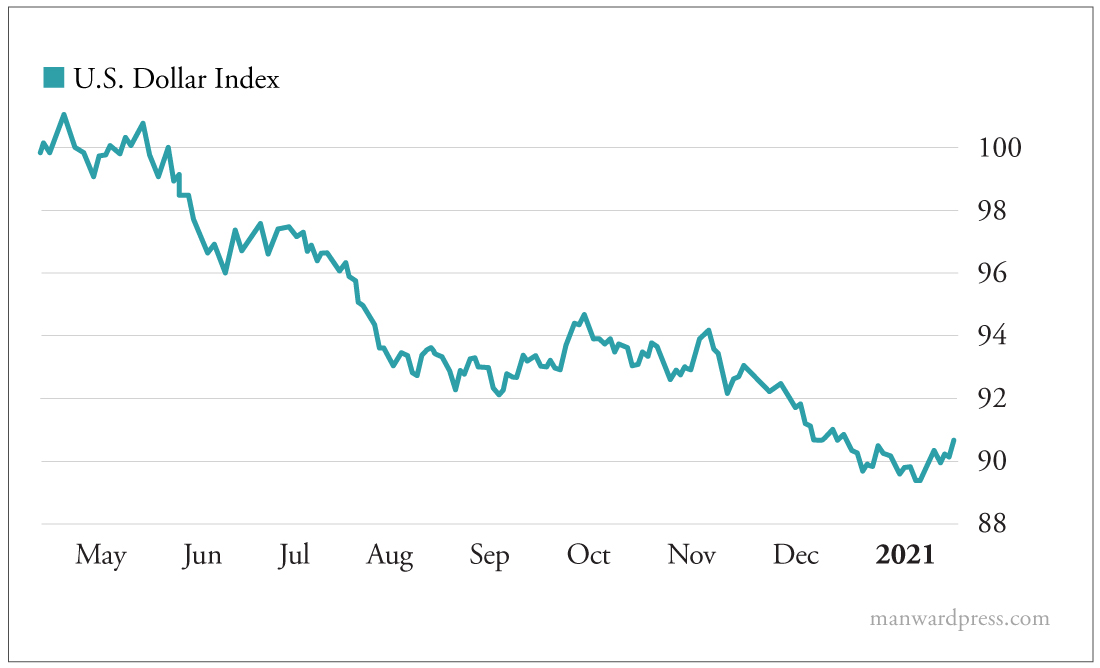 But there’s good news in it… and Yellen knows it.

When the value of the buck falls, it takes more of them to buy stocks.

It’s no surprise then that as she takes the reins of the nation’s economy, stocks are at all-time highs. After all, there have never been this many dollars in the world.

Things will be far higher when she hands things over to the next chump in line.

Of course, the free market is smart. It sees what’s happening.

It’s why Bitcoin and its altcoin brethren are soaring.

As speculators speculate over what comes next, cryptocurrency prices are striking record prices of their own.

But there is a key difference in these two forms of virtual money.

The dollar can be printed ad nauseam (or, less delicately, until we puke).

That’s not true with most cryptos. They have a purpose-built limit that, like a flask that only holds a shot or two, caps supply.

We’re not alone in thinking this way.

In a study done early last year, it was revealed that about a third of pension funds and hedge funds have quietly moved into digital money like Bitcoin.

That number is likely even larger today.

We already reported that MassMutual has bought a $100 million stake, with plans for more.

But did you know that Bill Miller, the famed value investor, has dedicated half of his MVP 1 hedge fund to Bitcoin?

Or that hedge fund legend Paul Tudor Jones is also in on the action… big-time? He recently said investing in Bitcoin is like investing in early tech stocks like Apple and Google.

When asked why… Jones points at our thesis above.

“Back in March and April, it became really apparent, given the monetary policy that was being pursued by the Fed, the incredible quantitative easing they were doing and other central banks were doing, that we were in an unprecedented time,” he said. “I came to the conclusion that Bitcoin was going to be the best of inflation trades, the defensive trades that you would take.”

That’s the thing with all this… It’s what has spun our head 180 degrees on crypto.

It’s no longer just a speculator’s speculation. It may be the very best way to get ahead of the debt-fueled troubles ahead.

The Dow is well on its way. But it has the natural drag of the companies that will fail as inflation takes hold.

We just released the details of the three coins we believe will lead the charge in the “Year of Crypto.” Each of them just did something that precedes just about every huge crypto move.

We’ve posted all the details here.

If you think stocks have been hot… wait until you see what’s possible with crypto.

Which do you think will hit 100K first? Bitcoin or the Dow? Share your thoughts at mailbag@manwardpress.com.