Why We’re Loading Up on This Type of Stock

The market’s greatest force is back.

While the financial world drools over the GameStop (GME) story – which is a go-nowhere tale of market ignorance that will dissolve back into nothing in a few days – a much more powerful force is coming to light.

This one is not filled with half-cocked conspiracies, misguided finger-pointing and a general lack of understanding of how Wall Street works.

This one is simple math… and pure capitalistic greed.

The greatest stock stimulator of the last 15 years is once again doing what it does best… making investors money.

While the financial press was busy correcting all of its wrong reporting about GameStop and Robinhood, a bigger story erupted. But nobody was left to cover it.

We’ve been musing about the corporate allure of low interest rates for more than a decade. With rates this low, any CFO worth his pay knows there’s a massive opportunity to put cash in the pockets of shareholders.

He just led Apple (AAPL) to the debt trough once again, where the company picked up a massive $14 billion in brand-new debt.

With a net profit margin north of 20%… we bet Apple will find plenty of ways to put that money to good use.

In the usual boilerplate, the company pledged to use its new cash for things like working capital, buying businesses… and, oh boy, rewarding shareholders through things like dividends and share buybacks.

You see, Apple has a problem. It’s a problem few companies have ever been fortunate enough to have to deal with.

It has too much cash.

Its margins are so strong, its business is so good, that it generates more cash than it knows what to do with.

At the moment, it’s sitting on close to $200 billion in cash… with truckloads more coming in every minute.

That cash is doing nobody any good.

Just as none of us wants a big stash of cash sitting in a do-nothing bank account, shareholders are right to demand that Cook and his team either put the cash to work or give it to shareholders.

They chose the latter.

But instead of raising the company’s modest dividend (and a shareholder’s tax burden), the company is buying back massive amounts of its own stock.

The chart tells the tale… 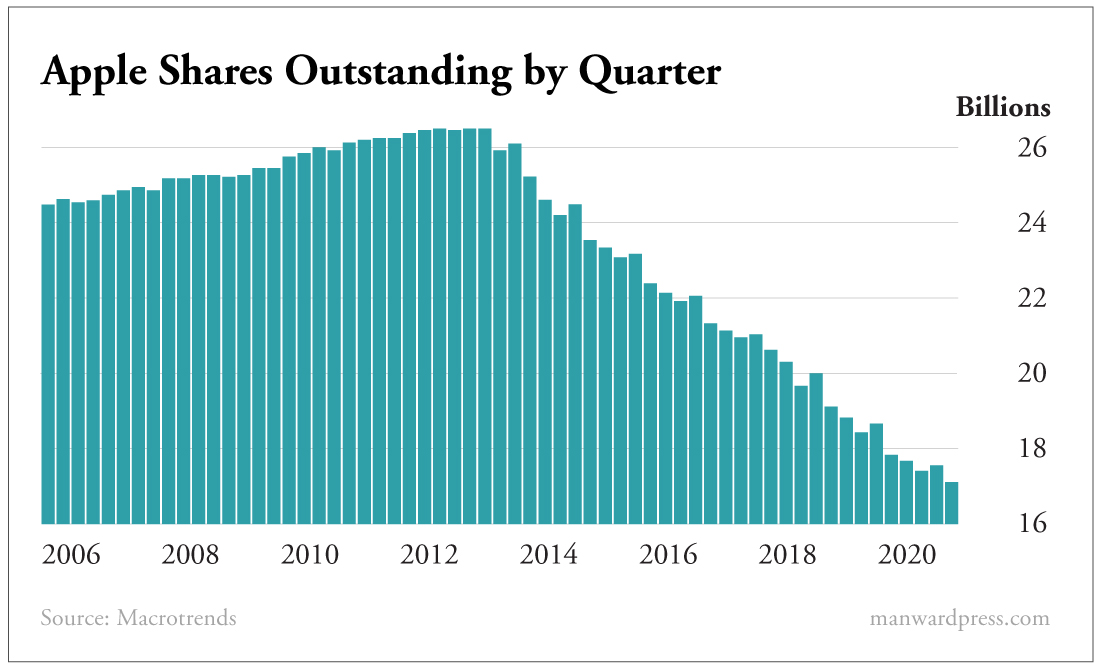 Since 2012, Apple has bought back more than $400 billion worth of its own shares… dramatically increasing the value of each remaining share.

In December alone it repurchased $50 billion worth of shares – an amount equivalent to all of the money Facebook (FB) has pledged in its entire multiyear buyback plan.

All told, Apple has repurchased the entire market cap of Walmart (WMT)… and then some.

But if Apple has already spent hundreds of billions of dollars on buybacks… why is it borrowing to do even more?

For a company that has pledged net cash neutrality (meaning it does not want to let its cash stockpile get any bigger), the idea of taking on more debt seems silly.

It does not need the cash.

But the company is smart. It knows the Federal Reserve has created a cash machine that’s handing out free money.

Tapping it is the very best way to make its shareholders rich.

It will borrow billions… and put that cash directly in the hands of shareholders through share buybacks and their oh-so-bullish effect on share price.

It’s as close to alchemy as we can get.

But – in a nod to our Dow 100K theory – Apple is not the only company turning low-interest-rate policy into solid gold.

Lots of companies are.

Fellow tech marvel Netflix (NFLX) said it intends to soon get in on the action.

And at the height of the GameStop drama last week, Visa (V) told us that it had just added $8 billion more to its plans. So did Bed Bath & Beyond (BBBY), the company we scored a massive triple-digit option gain on last week.

Fortunately, these companies are easy to find. They’re the ones atop the market’s leaderboard.

Their shares are rising because they’re taking advantage of the greatest moneymaking force of our lifetimes… near-zero interest rates.

In Manward Letter, we are taking full advantage of this opportunity. Our Modern Asset Portfolio – a unique model that adjusts allocations based on interest rates – calls for 20% of our capital to be invested in “buyback dominators.”

As you can imagine… it is working wonderfully.

We’re loading our portfolio with the fastest-moving stocks in the market.

For our latest research on a pre-IPO company that’s practically begging to go in your portfolio… click here. This just-released presentation details what may be the hottest tech opportunity of the year.

Do you have questions about share buybacks? Send them to mailbag@manwardpress.com.